History of the Office of Lord Lieutenant

The Office of Lord Lieutenant is military in origin and can be said to date from the reign of Henry VIII when its holder took over responsibility for the maintenance of order and for all military measures necessary for local defence. By 1569 provision was made for the appointment of deputies.

The Regulation of the Forces Act 1871 removed the Militia from the Lord Lieutenant’s direct control but it was not until 1921 that Lord Lieutenants finally lost the power to call on all able-bodied men of a county to fight in case of need.
The traditional links with the armed forces have been preserved in a modern form in the association of the Office of Lord Lieutenant with the Volunteer Reserve Forces and with other uniformed organisations such as the Police, Fire and Ambulance Services and many voluntary bodies such as the Red Cross, the Cadet Forces and other national and local Youth organisations
In recent years the sphere within which the Lord Lieutenant’s leadership role is exercised has come to include a wide range of matters, civil and defence, professional and voluntary. Lord Lieutenants are effective in such work largely because of their links to the Crown and the essentially voluntary and apolitical nature of their role.
From the earliest days the Office of Lord Lieutenant has been closely associated with the Magistracy and until the nineteenth century the Lord Lieutenant was appointed Clerk of the Peace.
Since at least the eighteenth century a military-style uniform has been worn by male Lieutenants (appropriate to the military origins of the post).
The office is unpaid and the age of retirement is 75. 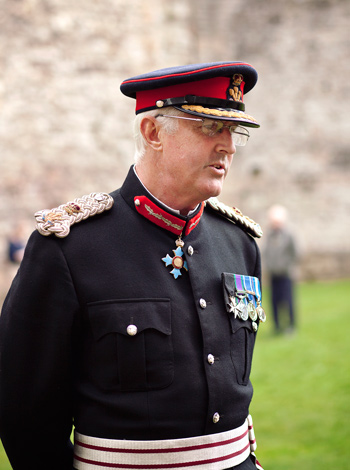 The purpose of the protocol is not to add unnecessary formality but to reduce confusion and ensure people feel comfortable. The Lord- Lieutenant represents Her Majesty The Queen. When the Lord- Lieutenant is attending an event in his official capacity in Gwent, he should be received with the same degree of etiquette and protocol as any member if the Royal Family.

Where the Lord Lieutenant is unable to attend and he is represented by his Vice Lord–Lieutenant or a Deputy Lieutenant, the same etiquette and protocol must be followed.

The correct form of address for the Lord-Lieutenant is as follows:

A space should be reserved for his car as close as possible to the entrance when the Lord- Lieutenant is attending an event in uniform.

In a church the Lord-Lieutenant should be in a front pew on the left in the first seat adjacent to the aisle (the Mayor if present should be ditto on the right).

For funerals if the family is on the left the Lord- Lieutenant sits on the right side at the front and on the aisle edge.

At other functions the Lord- Lieutenant should be seated in the same place as you would seat a member of the Royal Family: Simply as the principal guest.

At funerals, the Lord- Lieutenant or his representative (unless attending in a personal rather than official capacity) always enters the church last (2 minutes before the start of the service and before the coffin), and always leaves straight after the family.