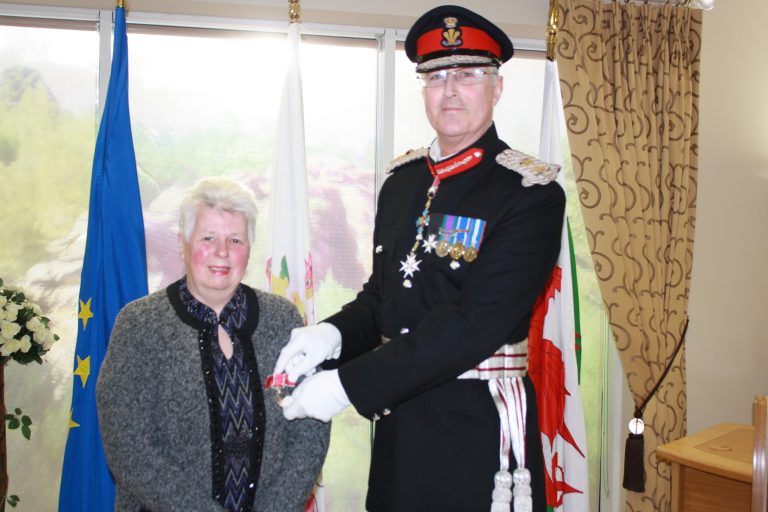 Pamela Guy from Risca, was awarded a British Empire Medal by the Lord-Lieutenant of Gwent Brigadier Robert Aitken CBE on 16th January 2017.

Pam, who studied Piano at the Royal Welsh College of Music Drama, was presented with the award in recognition of her contribution to music and charitable services.

First established in 1979, Pam serves as the Musical Director for the New Harmony Singers. Starting with just 16 signers the choir now has an impressive membership of 56.

Over the past 37 years the New Harmony Singers have organised concerts and events to support more than 100 local charities and voluntary organisations and raised in excess of £500,000.

Her Majesty The Queen’s representative for the County of Gwent, The Lord-Lieutenant, Brigadier Robert Aitken presented the medal to Pam accompanied by the Deputy Mayor of Caerphilly County Borough Council Cllr. John Bevan in the ceremony room of Penallta House council headquarters.

Brigadier Robert Aitken CBE Lord-Lieutenant of Gwent commented, “It is a great honour to present this award to Pam celebrating her many years of service to the community enriching the lives of others through music and raising vital funds for charities. I would like to extend many congratulations from one musician to another.”

Pam commented, “I would like to pay tribute to my parents who sacrificed so much for me to learn the piano and the organ and who supported me through college. It was because of their support that I was able to use my musical training to raise so much money to help so many worthy causes.”